I’ve been in London for about two and a half weeks now, and what a wonderful and exhausting two and a half weeks it has been. The first couple days consisted of (too many) runs to Primark with new friends to get bedding and kitchen supplies, nights at picturesque pubs getting to know each other, and becoming masters of the Tube.

The residence hall I live in is located in the Marylebone neighborhood of London, and everyone has their own room and own bathroom, though the bathrooms are unfortunately about the size of those on airplanes. But, we’re making it work. Now that I feel I am sufficiently settled in, with pictures on my wall and all of my belongings unpacked and organized, I feel like I can finally call London “home.” 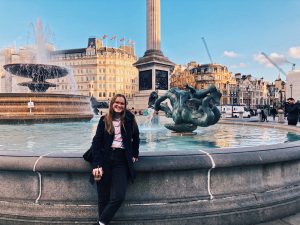 The University of Westminster hosted a boat party to welcome all the study abroad students during the first week, and we sailed down the Thames and danced in the rain with the London Eye and Tower Bridge looking over us. It was a fantastic way for everyone to bond and become more comfortable with each other before classes began several days later. 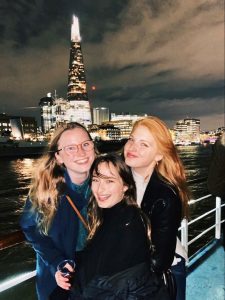 Even though the idea of going to class after a week of essentially being on vacation was not an entirely pleasing one, it is nice to have some structure to my schedule (even though I only have seven hours of class each week). I’m in three classes, and each one only meets once a week. I have one class at the Harrow campus which is about a 20-minute Tube ride away, but my other two are about a 20-minute walk from where I live. After being used to walking down University Avenue to my classes among other college students, it’s definitely odd walking to class in downtown London among adults going to work and children in uniforms walking to school.

I’ve had to remind myself a couple times that I’m actually in London and that I live and go to school here, because there is a surprising sense of normality to everything already. It’s amazing how fast you can adjust to something new. For example, waking up and saying “Let’s go explore Notting Hill today!” isn’t something that I’m used to being able to say casually, but now I can. And I need to remind myself how cool that is so I don’t begin to take being here for granted. As I wrote in my previous post, studying abroad in London always seemed so far away and distant, but now I’m living in that reality and I can already tell it will be so hard to leave at the end.

I haven’t experienced too much homesickness yet, and it really helps that I’ve bonded quickly with people in my program. Since getting here, I’ve wandered around Covent Garden, Chinatown, went to the British Museum and Tate Modern, and ziplined in a park in the middle of Shoreditch, among other things. Every neighborhood in London has a distinctly different character and energy to it, and it’s striking that even though you’re in the same city when you’re in Notting Hill and Shoreditch, it feels like you’re in completely different ones. Notting Hill is very residential and looks more posh while Shoreditch is incredibly quirky and more urban. 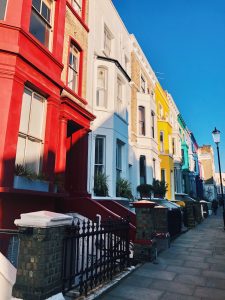 I feel so lucky to have made such close friends and to feel at home so fast in London. There are two other students from UW-Madison on my floor, and we frequently have “family dinners” with several of our other friends, run errands together, and listen to music and talk late at night in the kitchen. It’s crazy to me how these people I’ve only known for just over two weeks now feel like family. We already have so many memories together, like squeezing into a tiny Spanish bar and telling ghost stories after getting (overpriced but delicious) ice cream in Chinatown. If the first couple weeks were already this great, I can’t wait for what the next four months hold. Cheerio!