The weekdays
This week was yet another adventure; I’m not wasting my time here. Megan and I had a bit of a late night on Monday after my philosophy class because we went to the Paris Philharmonie. The theater was breathtaking. It was impossible to have a bad seat because the piano was in the center of the room and the rest of the layout was so well done. We were in the 6th row with a beautiful view of the pianist and cellist. They gave two encores one of which was a sassy tango and the other was one I recognized done better than any recording I had ever heard. Tuesday night was Eiffel Tower night. I took pictures of the lovely monument as well as pictures of Megan in front of the lovely monument. Wednesday, I had one of the yummiest experiences of my life. Vogue France claimed Circus to be the creators of the best cinnamon rolls in Paris and we were not disappointed. In fact, I’ve been craving another ever since. Thursday was a bit more relaxed and I spent most of my time doing homework. 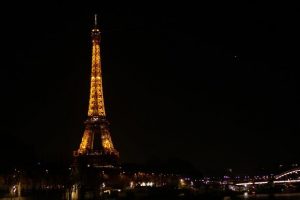 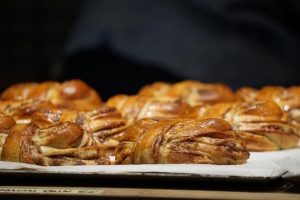 The Eiffel Tower at night. The amazing cinnamon rolls from Circus Bakery.

The weekend: Ireland
Dublin, Ireland was a super cool experience! Honestly, every day is a whirlwind on this study abroad experience, but this weekend was especially so. We took the metro RER to the airport and it was a super simple, and cheap way to get there. It only costs 10,60 Euros. Once we arrived in Dublin, Megan and I both commented on how it was such a nice breath of fresh air to be in a country where people were speaking English. Our Airbnb check-time wasn’t for another hour when we arrived on the street where it was, so we went to a café suggested by the host. It was called Two Boys Brew and I went for a savory avocado on sourdough with a poached egg while Megan with the omnipresent sweet tooth ordered the mixed berry pancake. Both were delicious. Once we checked in, we quickly put our bags down and set off to the city center of Dublin to see what was popping. We wandered about looking at various churches as well as the Dublin castle and Trinity university, but finally wound up in the famous Temple Bar district. It was on this street that we indulged in some wonderful gelato and ate dinner at a place called Bunsen, which was known for its “just burgers”. Turns out, they only served burgers. And only the stereotypical burger at that. Luckily, that’s exactly what we were looking for. The next day, we set off again to Dublin city center after a few hours of homework in the morning in order to see St. Patrick’s cathedral and to do the number one tourist activity in Dublin; take the Guinness factory tour. On Sunday, we decided that it wouldn’t be right to visit Ireland and not go see the Cliffs of Moher. So, we set off on a tour bus, which turned out to be the first double decker to ever go to the cliffs and we got amazing seats on the top in the second row. Ireland has the most green and luscious countryside to look at while one is driving. The Cliffs of Moher were as breathtaking as all the pictures implied they would be and then some. We were even so lucky as to be there on one of the rare days where Ireland saw blue skies and sunshine. After the cliffs, we headed to the Burren which is this moonlike landscape formed in limestone that used to sit at the bottom of the ocean but is now above water. After that, we finished off the day in Galway where we walked the cobblestone streets in a town that was about the same size as Madison. Our flight home was Monday morning and we arrived in the apartment a little over an hour before I had to leave for my class so I’d say it was perfect timing and gave us just enough to get a glimpse of the life of the Irish. 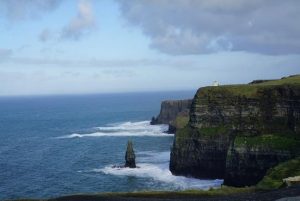 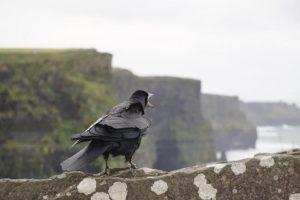 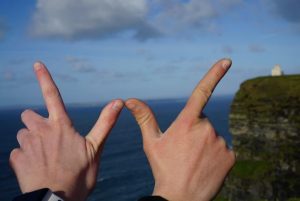 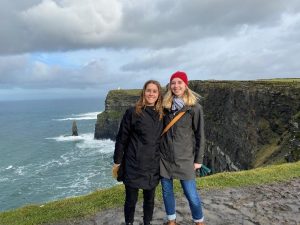 Photos from the Cliffs of Moher.