Hey there! It’s been a while since my pre-departure blog, but I’ve been in London for almost three weeks now. The culture gap took me by surprise. I honestly assumed that London would be similar to American cities like New York with minor differences. There is a sizeable difference in British people’s mannerisms and how the city feels versus in America. And of course, getting in the habit of looking the other way when crossing the street was hard to nail. I walked around by myself the first day to find tissues and lunch, but I came back empty-handed and overwhelmed because everything felt weird.

While these cultural differences are things I will learn as I go, my transition into the flat and the FIE program was easier than I expected. My three main concerns were: living arrangements, making friends and balancing travel and class. Per usual, everything is working out, and I am looking forward to the rest of my semester abroad.

My flat is made up of five bedrooms, three bathrooms, a common area and a kitchen. With 12 girls total it can feel a bit cramped and was an adjustment coming from Madison where I was lucky enough to have my own room. While there have been a few moments when I wish I had my own space to nap or call my parents, I try to spend as little time in my room as possible and rather be out exploring in my free time.

The residencies for UW in Madison are based in Kensington and Hyde Park. Both areas are insanely expensive— areas I will never be able to live in again. Given the people who live there are ~posh~, there is an 11 p.m. curfew. It’s not the best place for shopping or nightlife, so it’s forced me to learn the Tube and check out new neighborhoods. I live in the Kensington building and so I have felt safe and find the area easy to navigate. 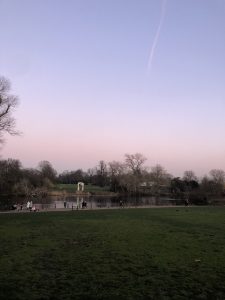 From left to right: What the residential areas of Kensington look like. Hyde Park is just a short walk away from my class and residential buildings.

What is great is that a lot of people go abroad to branch outside of their Madison friend group. Most of the girls in my flat didn’t know each other or anyone in the program. So far, it seems like going abroad forces people out of their comfort zones and to have social and friendly attitudes.

I have met a lot of Wisconsin students I didn’t know before and have kids from schools like Baylor, Florida and Oregon in my classes. However, I have yet to meet many British people. It’s great to make friendships that I can easily carry on next year, but I hope to make friends with some Londoners when my internship starts— if not sooner.

I purposefully made my class schedule light this semester so I could have time to do day trips and weekend trips. Since my internship isn’t until March, I am in three classes until then. My British Life & Culture and Infiltrating the Art World are both required for UW students and they run the entire semester. I am only in one elective— Shakespeare & Elizabethan Literature— that runs for eight weeks.

While classes are in three-hour blocks, so far, my professors have taken us on quite a few field trips around London. Within just three weeks I went to a play at the Barbican Centre, a walking tour of the City of London, Tate Britain and the Photographer’s Gallery in Soho.

I would recommend doing a heavy semester before going abroad so you can take fewer credits and spend more time doing what you want. 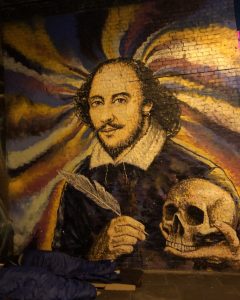 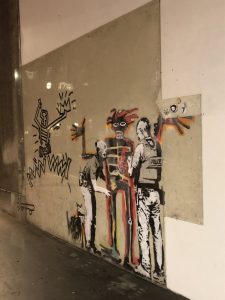 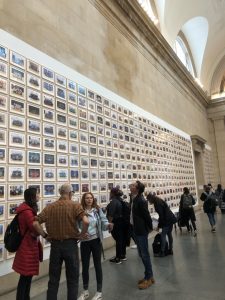 From left to right: Walking around the City of London, looking at the Globe Theatre. A Banksy in Shoreditch, spotted while walking to the Barbican Theatre. The exhibit “Year 3” at the Tate Britain.

This weekend I took my first trip to Brussels and Bruges. We took a train which I highly suggest if possible. The Eurostar is easy to get to and security is much less of a hassle than going to an airport (plus it’s more sustainable!). On Saturday, we paid for a tour of Bruges, which was a great call. While walking around a city on your own is nice, I think it is worth it to pay extra to have someone tell you about what you’re looking at.

Planning trips is much more intimidating than it is difficult. I think Belgium is a great first trip because it is easy to get to from London and a fair amount of people speak English. 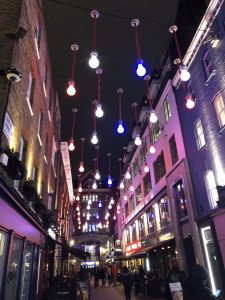 From left to right: A daytrip to Camden market. Soho (my favorite neighborhood) at night. Kiersten, me and Holly in Brussels.