This past weekend I traveled to Copenhagen with my some of my friends, and we also took a little trip to Sweden for a couple of hours one day since Malmö is only about a 40-minute train ride away. Our flight left at 10:30 Thursday morning, but we had to leave our residence hall around 7:00 to take a bus to the airport which was 1 hour away in Luton. When we arrived in Copenhagen, we were all very hungry, so we wandered around for a little bit and eventually found a restaurant with a buffet that had a reasonable price (we would soon learn how expensive Copenhagen is, even compared to London).

Everyone had brought their own bottle of water except for my friend Ethan, who asked for a glass of tap water from the waitress and was then told that he would have to pay around $3 for a glass with free refills. We were taken aback because we’ve never had to pay for water at a restaurant in London before. She also told the rest of us that we can’t have our own water bottles on the table! Quirks of Denmark, I guess!

Then, we checked into our AirBnB and relaxed for a bit. We spent some time playing cards and recharging from our day of traveling before we went to meet two of my good friends from Madison who are studying in Copenhagen for the semester. It was so refreshing to see people from home in person and get to catch up on each other’s lives face-to-face and not over FaceTime.

The next day, we got brunch at a delicious French restaurant and walked down to Tivoli, an amusement park close to downtown. However, when we found out how expensive it was, we decided we were better off spending the day walking around and doing cheaper tourist attractions. We went to the Round Tower (Rundetaarn in Danish) which has amazing views of the city and is a spiral ramp all the way up to the top. 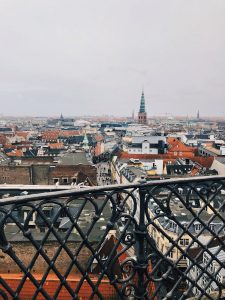 Even though it started to rain, we made a pit stop at a hot dog stand which turned out to be a great (and delicious) idea. After eating, we walked over to Christiania, which, to my understanding, is a part of Copenhagen that is sort of dissociated from the rest of Denmark and laws don’t fully apply there, seeing as there are marijuana vendors on the street (marijuana is illegal in the rest of Denmark). We talked to a local and he said that several times each day Christiania gets raided by police and the vendors drop all of their things and run!

My friend Emily who is studying in Copenhagen met up with us after we left Christiania and took us to Nyhavn, the picturesque row of colorful buildings along a canal that comes up on Google Images if you search “Copenhagen.” We got there just as it was getting dark, and the sailboats had lights wrapped around them and it was incredibly gorgeous (and a great backdrop for a photoshoot). 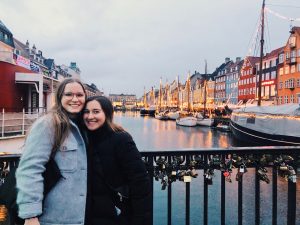 On Saturday, we took the train to Malmö, Sweden (because when you’re 40 minutes and $13 away from Sweden, you go to Sweden). We visited the windmill that’s well known there and ate lunch at the cutest café where I had the best chai latte of my life. Seriously. After that, we explored Malmö Castle and several of the museums close by, but then made our way back to Copenhagen. 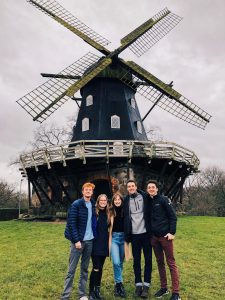 It was Emily’s birthday that day, so I joined her and her friends for dinner at Wagamama, which was delicious. It was amazing to be able to visit Emily for her birthday and still celebrate with her, even though we’re thousands of miles from home! I’ll definitely miss the colorful buildings and chai lattes of Scandinavia, but I was a little homesick for London and am happy to be back and able to relax after an amazing, but exhausting, weekend away.