This was week 5 of our first 6-week block and at this point, I’m realizing how disturbingly fast this wonderful experience is going. I truly am now able to empathize with those itching to travel, because I have travelled, and I love it. Every city, every country is unique and glorious. At this point in the journey, I’ve come to know the importance of taking a step back and letting it settle in that I am doing this…

The week in Paris

Monday was the first and perhaps one of the last days of our shopping for clothes in Paris. Not because we didn’t love what we saw, but because it turned out to be the last day for the sales of January. On Tuesday, we studied hard because classes are kicking it up a notch per usual since finals are already next week. On Wednesday, I wanted to go for a run, so we went a mile and a half and then finished some more homework before I had my philosophy class in the evening. After that, we heeded the wise advice of our UW professor and went to a fantastic creperie in Montparnasse and then a jazz club that I found on the walk assignment from that same UW professor. The jazz club was called Montparnasse Jazz Café and it used to be Le Petit Journal Jazz club. It is located conveniently across from the railroad station and I’ll imagine it attracted many visitors in its heyday during the 1920’s and 30’s. Thursday was again squandered by more homework; however, it was a little more fun in that I needed to fulfill an assignment by going to the Quai Branly Museum and Megan already had to go there for another class as a field trip. The museum was filled with artifacts of African, Oceanic, Asian, and American descent. Friday morning, we packed our bags and set off for Croatia. 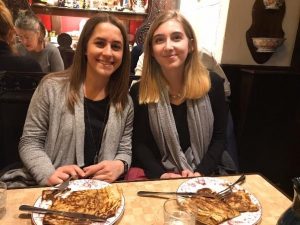 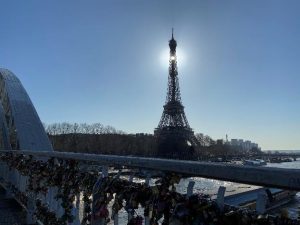 Photo 1: Megan and me at dinner eating sweet crepes! Photo 2: View from outside the museum.

At first, when Megan and I decided to go to Croatia one weekend on this trip, we didn’t have the highest of expectations. In fact, the only reason we even thought of it was because Megan’s cousin as well as a few other people continually and highly recommended it. We weren’t sure why. The image I had in my mind of it was this harsh eastern European country. I couldn’t have been more wrong. As soon as we arrived in Dubrovnik, my opinion changed. To start, the view from our Airbnb was breathtaking. It was of the Mediterranean Sea and an island about a kilometer off the shore. There are so many beautiful islands and mountains in Croatia. After we sat down for a second and stared at the view (we had arrived exactly during golden hour), we decided to go to the main city which is called Old Town and have some true Croatian food. That meant calamari. Being so close to the sea, of course seafood is what they’re known for, along with olives, olive oil, cheese, and wine. While we were enjoying (me for the first time) our calamari, I noticed a little friend coming to check up on us. Apparently, cats can just run all over old town freely in Dubrovnik. And, wonderfully, they seem to be well taken care of and clean. After dinner, it was a pleasant walk back to the Airbnb and I watched another episode of Game of Thrones in preparation for our impending tour the next afternoon.

We spent Saturday morning doing homework but made our way to the city around 10:30 for a little lunch so we could be on time to meet our tour guide for the 12 o’clock tour. Not only was it full of information and filming locations for Game of Thrones, but we also learned a lot about the history of Dubrovnik seeing as the filming locations were within some extremely historical buildings. After that, we went back into the city walls and kept walking past more and more people who were holding ice cream cones. This obviously was a sign that we needed to obtain our own ice cream, so we did and then we meandered to Blackwater Bay (from Game of Thrones), a beautiful bay with large boulders peaking up out of the incredibly clear and blue water. We began to watch the sunset and then we went to get a takeaway pizza for dinner and some pastries for the following morning. Once we arrived back in the Airbnb, we watched the sun set again and did another hour or so of homework after a lovely meal accompanied by another inspired episode of Game of Thrones.

Sunday was a day of exercise and surprises. We walked to the old town with plans of climbing the wall and walking around the city. Turns out, it was the last day that doing this would be free because of a special religious even they were holding this week for their Saint Blaise. Every corner of the city held a new and glorious view. I kid you not, we stopped every 20 feet for a new photo. After walking the wall, we came back down and happened upon another large group eating ice cream, this meant we had to go and get ourselves another scoop. If you’ve
never tried Nutella and vanilla swirled ice cream, it is a must. We went back to the bay and sat on the other side of it, enjoying the sun and the frozen treat when out of the blue, we heard a tremendously loud gunshot. Then another followed it, then another, and about 30 more after that. Initially we were panicked because the sound was very close, but I looked up and could see that the people on the wall were watching some sort of event where the gunshots were coming from. The only other creatures who seemed to be fazed by this besides Megan and myself were the birds who were happily sleeping until the shots sounded. We got up from our little pier and went to go get some trail mix and fruit for our next event; a hike up the nearby Mount Srd. As we were walking towards the city gates, a line of about 30 men dressed in red jackets with navy pants and a white belt came marching with guns on their shoulders. Naturally, we followed this spectacle. As we entered the town, we realized it was a parade of sorts. There were band musicians and flag bearers as well. It was all for the St. Blaise event. Once we got our food, we headed up countless flights of stairs and a zig-zagged slippery gravel path up the mountain. Online it said it would take 40 minutes. They lied online. I don’t know how they did it in that little time, but it took us just under 2 hours. Our main issue being that the gravel in the gravel path was more like a pile of rocks, not pebbles. They were large and very capable of rolling your ankle or just rolling themselves right on down the path and taking your unsuspecting foot along with. The view at the top was of course worth every tedious step up and down the mountain. We ended our day with another pizza and went to bed at 8 pm from both physical exhaustion as well as in preparation for a 6 am flight (4 am wake-up) the next morning back to Paris. Croatia is definitely a country I plan on visiting again in the near future. 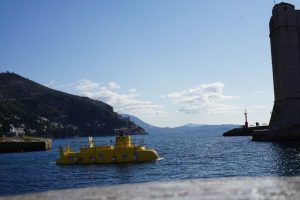 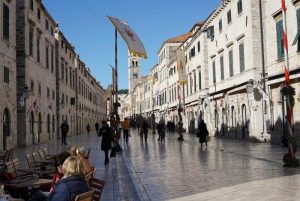 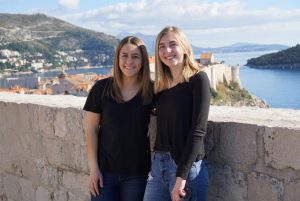 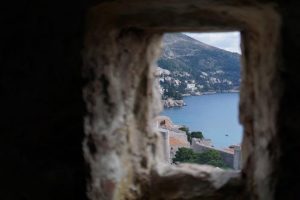 Photo 5: Megan and me on top of an old fortress used for Game of Thrones filming recently.
Photo 6: View from a window in the old town wall. 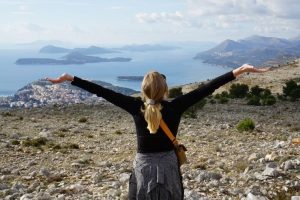 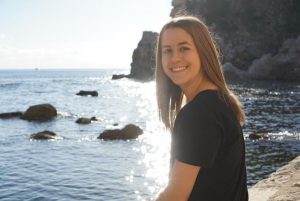 Photo 7: Me at the top of Mount Srd in Dubrovnik. Photo 8: Megan in Blackwater Bay (from
Game of Thrones).