Somewhere between home, Paris, Ireland, Croatia, and London, I feel justified in saying that I’ve obtained some knowledge in the field of travel. The most important lessons within that knowledge being the following:
1. Time permitting, the best thing to do on the first day in an unfamiliar place is to just walk around and familiarize yourself, see what places you happen upon.
2. Travel time tends to take longer than you want, so plan for it. It also tends to be more expensive, so give that area of your budget a bit of a cushion.
3. Weather plays such a big role in how your trip goes, nicer days bring fonder memories, so make sure you have a backup plan for rainy days, so you don’t waste any precious time.
4. Try the food that the country/city is known best for. There’s a reason why they’re known for it.
5. Pack your suitcase a little lighter so you have room for your souvenirs that you’re bound to buy.
6. For those on a budget, the best souvenir is a picture of yourself in that place, and there will always be a super beautiful/photogenic place to take those pictures in that country. (ex: Abbey Road in London, Rue Cremieux in Paris)
7. They don’t let you bring mustard on a plane. Apparently, it’s a liquid.

The week
I had my last few days of class for this first block and they went smoothly. I finished up my last essay for French philosophy and I took a final exam for the UW Madison class (small paragraph responses about what we learned, nothing out of the blue or ridiculously hard). The only non-academic related thing I did this week was go to a super pretty street in the 12th district called Rue Cremieux. There was a sign that said please don’t take pictures, but I took a bunch anyways because it was just so cute. After exams and final essays, the first block was over, and Megan and I were faced with a wonderful 6 days of uninterrupted travel in London.

London baby! – Joey Tribbiani
The long weekend in London was absolutely a wonderful and worthwhile experience. Megan’s parents came to town, so we got to indulge a little more in the finer aspects of travel such as high tea at the famous Fortnum and Mason tea parlor. There were tiny crustless tea sandwiches, scones (apparently pronounced “scone” like “gone”), and glorious little sweets piled high on elegant plates. I’ve never been the largest fan of tea, but the grey earl was enjoyable enough. My favorite was the scones, and the best part about it all? You were allowed, no… Expected to order more food seeing as you paid one big price and it was bottomless heavenly tea. The next day, we got to take a bus tour of the city in order to get a better general idea of the places we wanted to visit and the layout in general of the city. After that, we explored the Tower of London and got to witness in person the esteemed crown jewels as well as some snazzy suits of army and lastly, the torture chambers underground. I don’t completely understand, but I adhere to this desire as well for the need to see these horrifically interesting torture devices used by human’s passed. Unfortunately, the weather was that of the typical London and there was a lot of Uber rides and uncomfortable minutes spent standing in the cold wind and rain. We wound up going to Harrods with Megan’s family and roamed through the legendary store until I found some mustard to bring home to my great grandfather whom apparently will have a story to tell me about Harrods upon my return with the mustard.

The last day of the trip to London, Megan and I were on our own and we were taking it as a more frugal day. We went to see Abbey Road and joined the horde of tourists taking turns crossing the road, mimicking that historical album cover. After that, it was a quick mile or so jaunt to see 221 B Baker Street and purchase a magnet to add to our growing collection from each place we’ve visited. After that, another hour or so walking to a cupcake shop that was highly recommended online and it was obvious why once we arrived at the completely pink and florally decorated shop. People were lined up outside not for the food or tea, but merely to take a picture next to the building. We of course had to stop in and try a cupcake as well as some vanilla tea which I really loved. Another hour walk, and we found ourselves at Westminster Abbey and then by the London Eye. Both of which were too expensive to go in/on, so I just took a lot of pictures instead. To end the trip, we ate at this cute little coffee chain called Joe and the Juice which had the best gluten free whole wheat bread on a sandwich that I’ve ever had. The flight back was uneventful and since then, we’ve spent the past few days back at class as well as with Megan’s family who were kind enough to take us out with them to a true French dinner with escargot and oysters and duck and cake. I hadn’t ever dreamed I could be so delightfully full. This next weekend, we will be staying in Paris for the first time and I’m extremely excited to be a tourist in what already feels much more like a home than a foreign land. 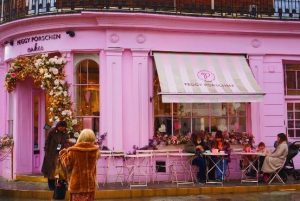