By the time this gets posted, I’m already halfway through with my program. But here are some of my first impressions during the first 2 weeks I’ve been in Singapore.

To preface, I had a rough time getting to Singapore. I had a 4-hour delay due to snow, missed one of my flights, lost my luggage, waited another 2.5 hours to get checked into my hostel (dorm), and some other misfortunes, so being in Singapore after the first day felt like heaven. 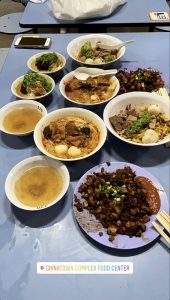 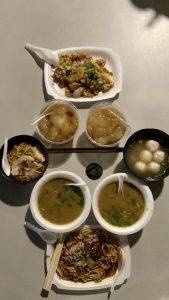 Some of the foods I tasted during a hawker center food tour.

The food here is amazing! Hawker centers and food courts provide great-tasting and aromatic food that are cheap (less than US$3 for a full plate of food). I ate Hainanese Chicken Rice (one of Singapore’s well-known dish) for two days straight and then a mix of Malay and Indian food for the rest of the week. There’s sooooo many options for food that I’ll never get tired of eating here. I even had the opportunity to eat at a couple of Michelin Star restaurants as some are located in a few of the hawker centers. Some of these centers have more than 100 stalls, which makes choosing food a lot harder but sharing with friends a lot easier when everyone buys something for the group.

The moment I stepped into Singapore I could hear a lot of different languages including English, Mandarin, Tamil, Malay, and Hokkien. Every official sign has English, Chinese, Malay, and Tamil, and the MRT (Mass Rapid Transit, a.k.a. train/subway) announces stops and reminders in all of these languages. “Singlish” is the main form of communication between locals, which happens to be a blend of all of the languages. I’ve been learning a ton of words in these languages, getting used to slang and abbreviations, and understanding the different syntax that Singaporeans use. I’m also picking up a lot of Mandarin (I can only speak English and some Cantonese) since I get mistaken for a native Chinese Singaporean and people automatically talk to me in Mandarin. In general though, I can communicate and get around Singapore with only knowing English.

The weather here is nice. Sure it’s a bit humid and rains like every 3 days, but the temperature is a constant 85o F (29o C) and sunny or partly cloudy. Around 2-3 PM it does spike up to about 95o F but quickly lowers by 5PM. I learned that a lot of the mosquitoes here are sterile, so I rarely get bug bites. I’m still adjusting to the hotter weather, especially at night when I only have a ceiling fan to cool myself down, but it’s better than the colder Wisconsin winter weather.

NUS is an amazing campus! We have an infinity pool, a lot of greenery, outdoor seating with outlets everywhere, Instagram-worthy spots, and cool buildings. The campus is so big that there’s literally a freeway that splits the campus into two parts. Their version of the 80 is split into multiple bus routes to make sure that everyone gets where they need to in a timely manner (instead of having to loop the entire campus which might take more than 1.5 hours).

I’ve been enjoying most of my classes (modules) even if I didn’t realize that they are general education and elementary level courses. I noticed that the United States gets referred to often when talking about racial and ethnic issues. It’s interesting to learn about the Chinese diaspora in Singapore and how that differs from the Chinese diaspora in the US. All of my profs are very knowledgeable in their field and try their best to share their enthusiasm with the class.

I won’t ever complain about UW’s enrollment process ever again. NUS has the most convoluted process I have ever seen. You have to rank your modules and tutorials (discussions) if you want to add or swap them. The ranking process is a whole other issue because you’re also ranking different module tutorials together. There are two enrollment periods (open for about 8 hours each) and if you miss them, you’re mostly out of luck. The system closes right after and departments have 1-2 days to reject or accept your request. Some courses even have specific tutorials for exchange students, and you might not know until after you’re allocated a time. 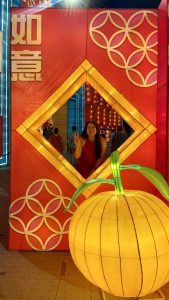 It’s only a few weeks before Lunar New Year (LNY) when I arrived so festivities and decorations are everywhere. While walking through malls, grocery stores, and throughout Singapore, I’ve heard many LNY themed songs (some that have been on repeat for a full day). This is the first year where I celebrated LNY in Asia and without my family. While I’m a little sad that my family can’t be with me to see all of the festivities in Singapore, I’m happy to share this holiday with friends and bond with other Chinese diaspora people.

So far, it’s been a mix of doing tourist-y things and trying to get immersed into Singaporean culture.Some of the things I’ve done include:

Overall, NUS and Singapore has been a dream come true and I’m looking forward to what happens next!