I have never experienced an interactive seminar style class before this class. As a rising senior, majoring in Psychology and Legal Studies, I have taken a variety of classes with various class sizes. These have ranged from about forty to hundreds of students. In this class, with only 13 students, I have gotten to know my classmates and feel more comfortable participating because of the small class size.

Something that is different about this course is that the discussion does not stop when you leave the classroom. Conversations are carried out while walking through the city, on field trips, on the Metro, and even over dinner.

I have learned a lot from my classmates, as they come from different backgrounds and have many perspectives on topics in race and politics. Before the seminar we do readings, take notes, and analyze the material. In the seminar, we share our takeaways, and Professor Cannon facilitates the conversation for a greater understanding.

Professor Cannon has helped my group learn so much, as he is an expert in his field, and chooses controversial topics for readings. We critically think about the multiple perspectives of authors and of our own views and opinions.

The field trips have been amazing experiences that connect to what we’ve learned in the classroom. On one of the field trips, our group visited the African American Civil War Museum. This museum was small in size, but had a lot of information and artifacts all throughout the museum. I walked around the museum, reading some of the walls, but I learned the most through the tour guide, Marquett Milton. Mr. Milton talked about in-depth topics concerning the war, common misconceptions about the war, facts that were not well-known, and much more. 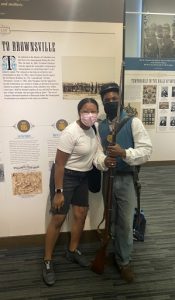 Mr. Milton was dressed as a soldier, and even had a gun. He showed us the nine steps to load a gun, and told us that soldiers were trained to shoot three times per minute. Another surprising thing I learned was that people from other countries fought in the Civil War, including people from Mexico, Germany, Ethiopia, India, Thailand, China, the Caribbean, and Chile. Mr. Milton explained that African Americans were not allowed to be in the military, but it was a cry for help to allow African Americans to serve, in exchange for their freedom. This was very interesting to me because I have learned about the Civil War in school, but I have never heard it in the context or perspective of African Americans.

An important point made by Mr. Milton was that the descendants of the confederate leaders and generals promoted and spread the Lost Cause of the Confederacy ideology. This ideology was supposedly the confederate’s side of the story and was widely taught in schools. This complemented the course material, as in class we discussed the Lost Cause of the Confederacy ideology, and how this was included in history textbooks in the southern states. Mr. Milton worked at the African American Civil War Museum for eleven years, so he was highly familiar with the Civil War and very helpful in explaining the war.