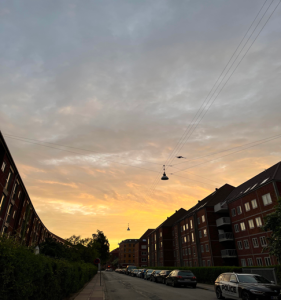 Being in Copenhagen for only three weeks, it is definitely hard to have a daily schedule. I wake up everyday looking forward to doing something that I have not done yesterday. This picture was the first morning sky that I captured here in Copenhagen after arriving. I woke up at 5am– due to a failed attempt at readjusting my sleeping schedule in a different time zone, and found myself walking around the neighborhood of the dorm we were staying at. So if I was to write up a concrete schedule of my daily life, it would be first waking up ready to capture what the new morning sky would look like. On many days there were no beautiful streaks of gold and orange since it rains a lot here. As the locals here would say, “there is no such thing as bad weather, just bad clothing.” 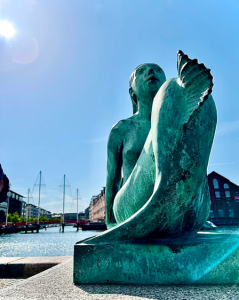 After the usual morning routine of getting ready, I head towards København where our class for the program is held. It is very convenient that the metro we use is always running every 4 minutes. So even if you miss one, it does not take long for another one to already be showing up. Being late to class was never an issue. However, many people are always crowding the stairs and stations, everyone just trying to get to school or to work as well. Living locally here means that transportation such as the metro or biking is super crucial. Once I get to the area of København, breakfast usually consists of delicious chocolate croissants from a nearby coffee shop and some orange juice. This combination always gets my energy going every morning even though the weather may not be as positive. 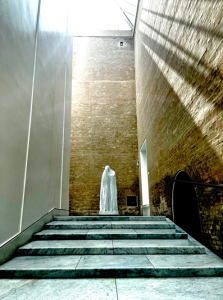 During class, we have discussions on assigned readings or we even get to meet various guest speakers. Because class runs from 10:00am to 1:00pm, there’s always time to keep discussions running and learn from one another. After class is over, if on the specific days where we have special excursions, that is what usually takes place. We’ve done many excursions together as a class, some very cool examples include visiting the Black Diamond Library, the Glyptotek museum, and taking a cooking class on Danish cuisine. Daily activities after class included visiting these various spots and just exploring the city in general. 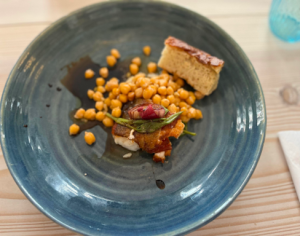 However, during alone times, I often find myself looking for cozy spots to just stay in. I’ve learned that a common term used here to describe a cozy vibe is hyggelig. From the streets I walk in, buildings I see, and just partaking in small passing activities, I can tell that this culture really highlights being warm and comfortable. And this can easily be achieved by yourself or with others. So despite being a relatively small place, Copenhagen has numerous spots to just embrace your being in. 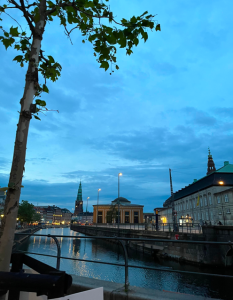 After a long day of walking and exploring, I take the metro back to the dorm. The sun here sets very late so it seems like the day is never really over, even when it is already 9pm. It’s very interesting, I tell my friends and family back home that you just don’t sleep here. But of course that’s not the case as my body tells me that I need to get some major rest. Sometimes I’d stop by the local shops near the dorm to pick up some juice and snacks before heading back. My daily life in Copenhagen consists of trying something new everyday and trying to implement a hygge lifestyle.

Food in Copenhagen by Jekiah M.

Traditional Danish food is heavily influenced by what Danes ate hundreds of years ago. The Danish meals in the past relied on the ingredients they had access to – which were mostly seasonal. Due to the short harvest season in Denmark, Danes used methods such as ‘pickling’ to preserve food throughout the long winter. Today, traditional Danish meals like smorrebrod are still made with pickled ingredients (i.e., pickled onions, pickled cucumbers).

Now, in Copenhagen people from all parts of the world live amongst each other. As you walk down the streets of Nørrebro – the neighborhood I have learned is infamous for its cultural diversity – you walk through the world’s nations. It is almost like you hop from continent to continent when you first pass a Shawarma house, then African Cuisine, and then traditional Danish Smorrebrod. Because of the proximity of multiple cultures to each other, Danish foods are being influenced and Danish Chefs are innovating long held traditional dishes to fit the diaspora of communities they serve. 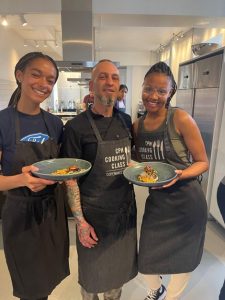 Our Global Gateway Copenhagen Cohort was lucky enough to go on a food tour throughout the city, where we were served experiential meals made with traditional Danish ingredients, and ingredients brought to Copenhagen’s recipes by immigrants. At the first stop, we were instructed on how to cook fried chickpeas topped with balsamic herbs sauce, and seared fish. The meal consisted of flavors from both Danish history and from the chef’s Lebanese heritage… This was the first example of ‘cultural fusion’ that we experienced on the tour. Each of our groups successfully made the meal and we enjoyed it together before heading to our second stop where we were served a plate of almost entirely green vegetables with caviar, a sauce made from invasive oysters in Copenhagen’s harbors, and other pickled vegetables. The chef told us of his work toward restructuring the way in which we provide ‘sustainable’ meals. Not only did he use local ingredients, but also an invasive species of oysters as a measure to reduce the negative effect they have on Copenhagen’s waterways. This helps to encourage population growth of oysters native to the area! We all found the Danes cultural interest in sustainability and eco-consciousness intriguing, and the fusion of flavors to be delicious! 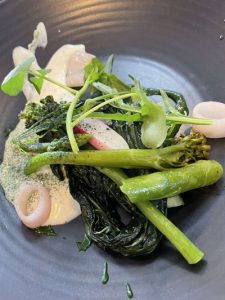 By using locally sourced ingredients and introducing ideas used in other parts of the world, these Danish chefs are revolutionizing the food industry. Overall, we enjoyed each meal we were able to taste, and especially the time we spent cooking together! It was an experience that arose conversations about how grateful we are for the ability to be here in Copenhagen, learning with one another.