Here in China, we have off this Monday and Tuesday for the Tomb-Sweeping holiday. It’s a family holiday in which the Chinese visit the graves of their ancestors. Many Chinese students will either go home or simply rest during the four day break. Taking advantage of the rare break, a few classmates and I took the high speed rail from Beijing to Tianjin for the weekend. 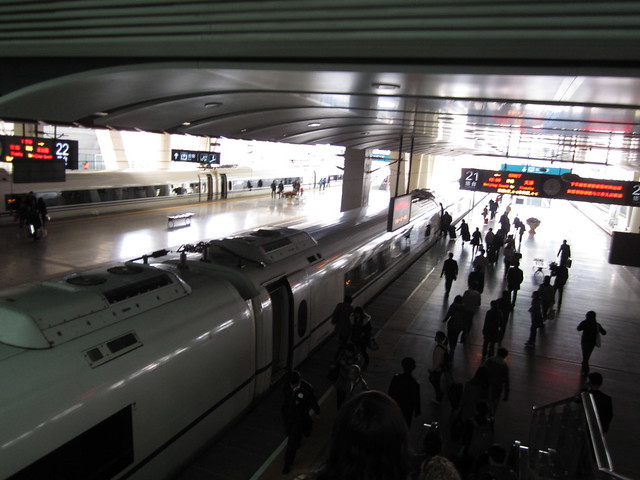 Just how fast is the high speed rail? I’ve hear that it takes a taxi or bus approximately 2 and a half hours to get to Tianjin from Beijing. Longer with traffic. The normal train takes about an hour and 15 minutes. The Jing-Jin High Speed Rail took us just 30 minutes! Imagine taking a train from Madison to Chicago and arriving less than an hour later! No sooner did we get comfortable in the large roomy seats and stare in awe out the window at how fast the landscape passed us by, did we hear the announcement “Welcome to Tianjin.” It was amazing, though, I admit, a little frightening. 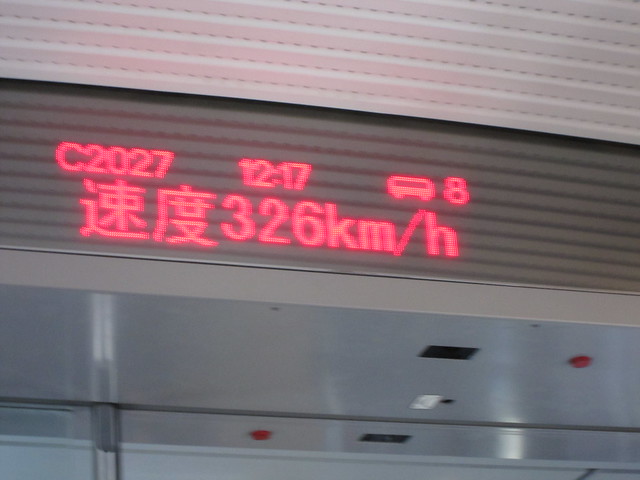 Most of us immediately noticed the change in air quality as soon as we walked out into the waterfront city. Since coming to Beijing I have developed a cough that follows me obediently like a shadow. At first I thought it was just me; maybe allergies or poor diet or not enough sleep or stress. However, after arriving in Tianjin and feeling as if I could breathe again for the first time in weeks, I have concluded it definitely was not just me; it is definitely the dry dry air of Beijing. 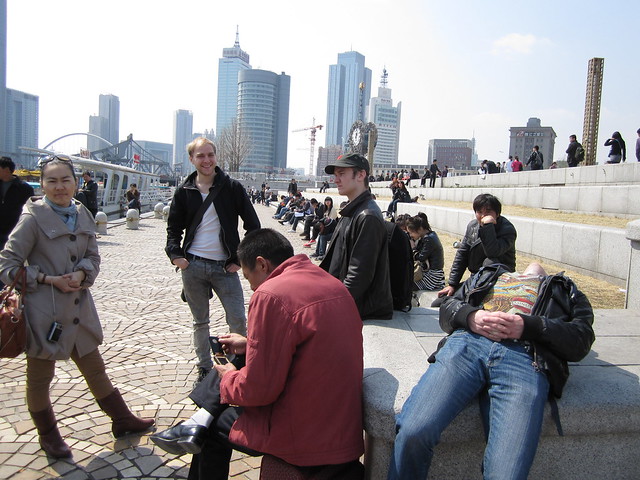 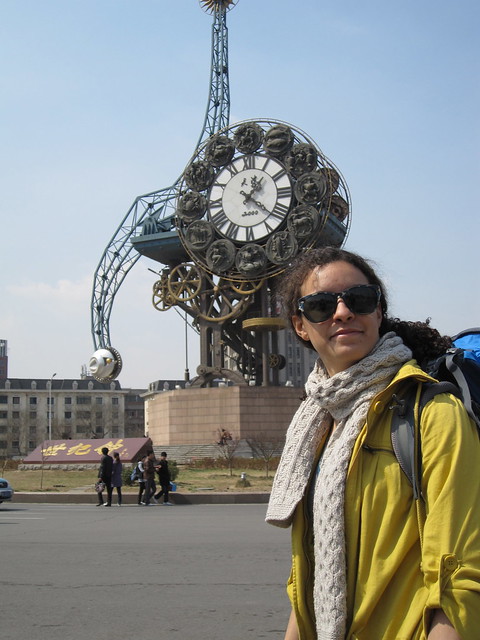 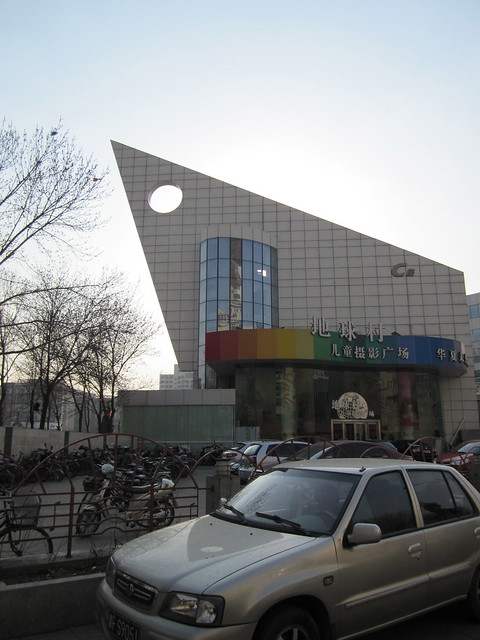 Touring Tianjin was a welcome break from the grueling school routine. I’ve heard rumors that study abroad is more like a vacation, with classes being less intensive and schedules more free than at one’s home university. This is not the case for this program. We have language class every day from 8-12 and then 3 other classes that meet once a week on Monday, Tuesday and Thursday afternoon respectively. Most nights we must memorize about 15 new Chinese characters (also called Hanzi) if not because we have a quiz the next day which is often the case, than because the next day will we have moved on to the next chapter. During the week I rarely have time or energy to go anywhere too far from campus, although I have started a part-time job which I will talk about in a later post. Back to the weekend break! 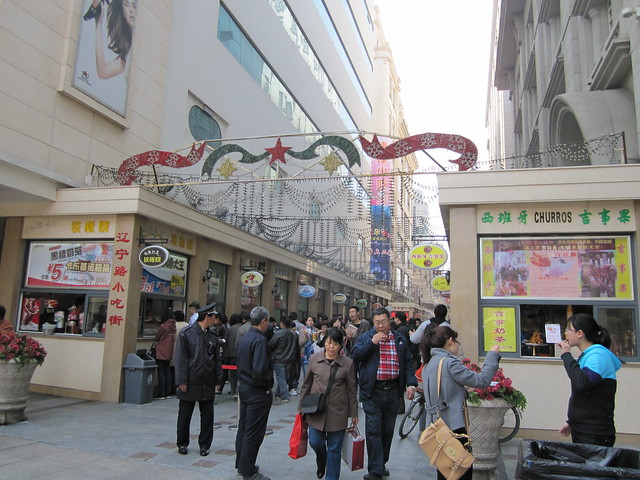 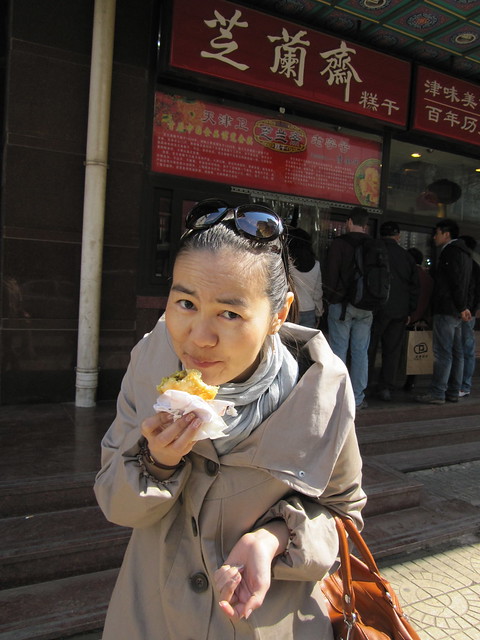 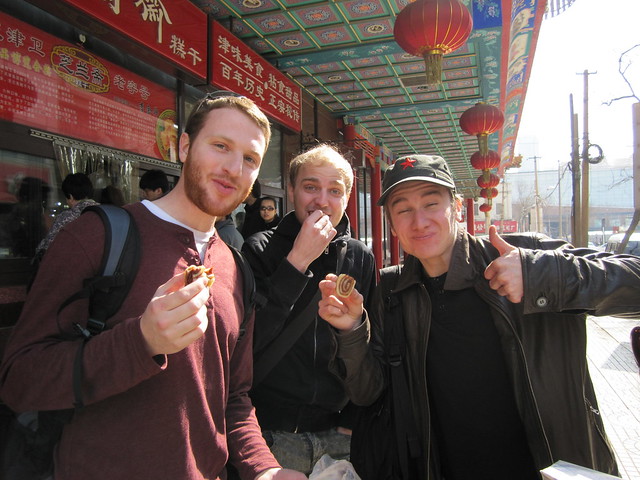 The Tianjin Television tower is taller than Beijing’s. A teacher recommended that we go up to have a look. 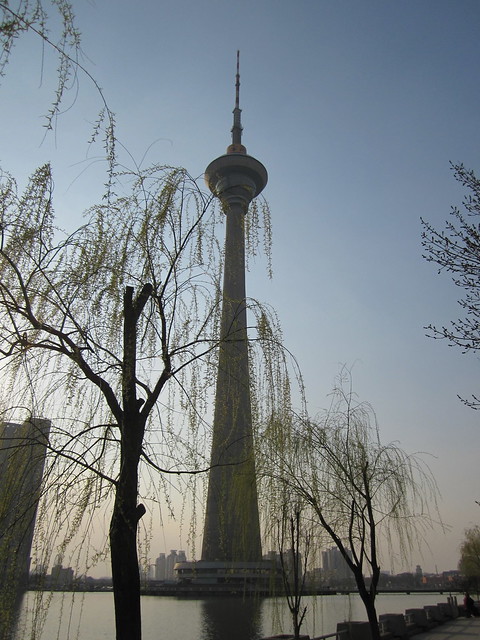 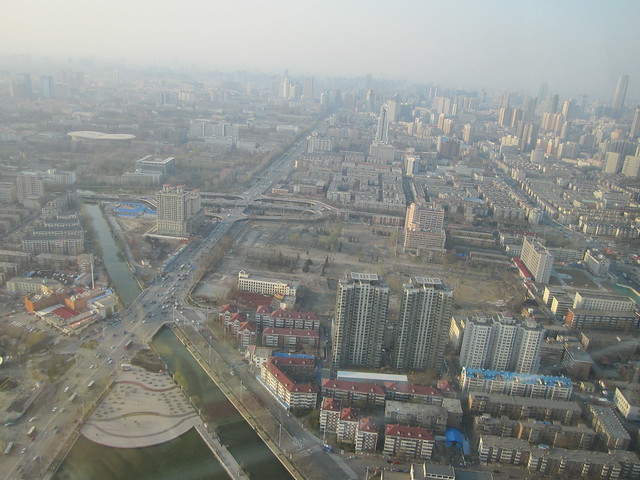 The next day we went to the Ancient Culture Street where there is shopping for all the Chinese souvenirs you could ever want. It’s also a good place to practice bargaining skills. 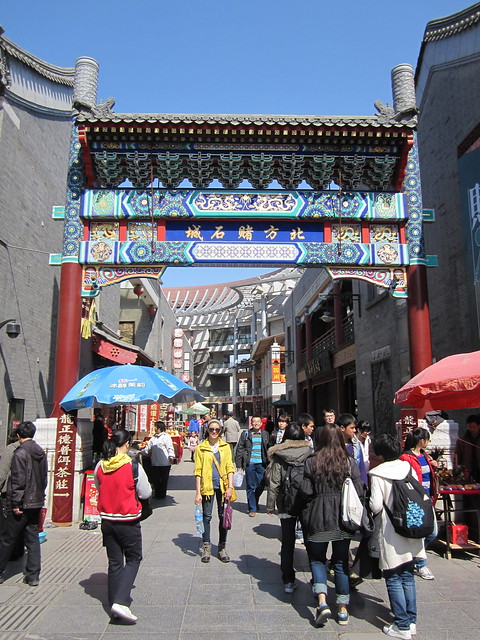 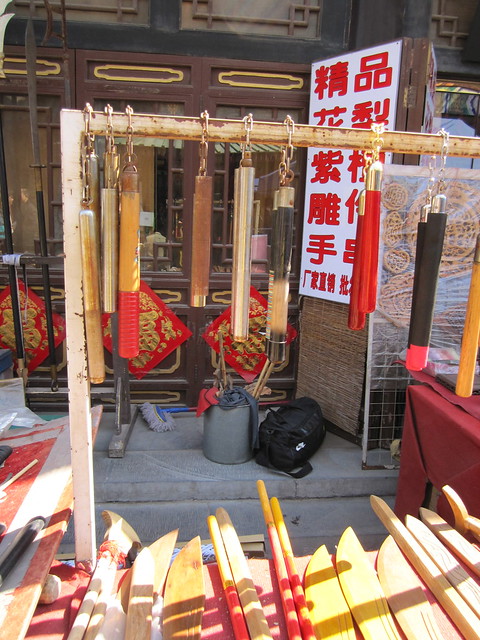 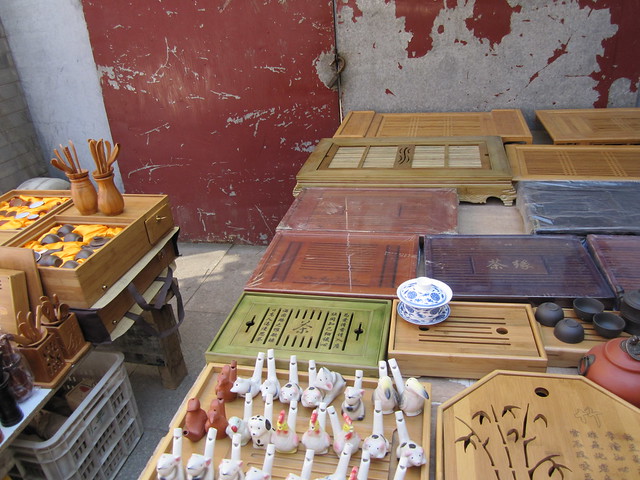 After wandering through the Ancient Culture Street (more accurately labyrinth), we split into two taxis and went to WuDaDao a scenic area whose architecture reflects its colonial history. Our taxi driver suggested we take a bike tour of WuDaDao and dropped us off in front of a bicycle rental place in the middle of a residential area there. When we saw the bicycle-built-for-4, we knew we had to give it a try. The three of us tried to meet up with our other two friends, however with descriptions like “We are in front of a KFC,” “Do you see the building under-construction?” “Can you see Tian Ta?” “Yeah I see it, it looks far away” “Yeah, it’s far away from us too” we weren’t able to guide them to the bicycle rental place. 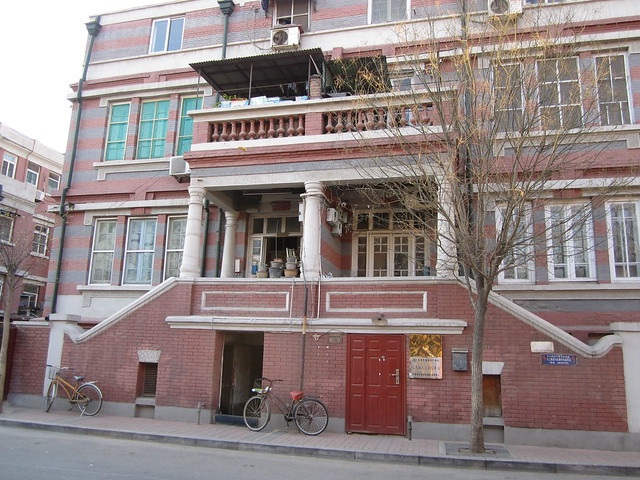 Riding through this neighborhood of European-influenced architecture, we almost had to remind ourselves, “Wait a second, we’re in China.” It wasn’t so difficult to forget, as many Chinese passersby took pictures of us as if we were the sites and they the tourists! One of the photographers was kind enough to snap a few with our camera. 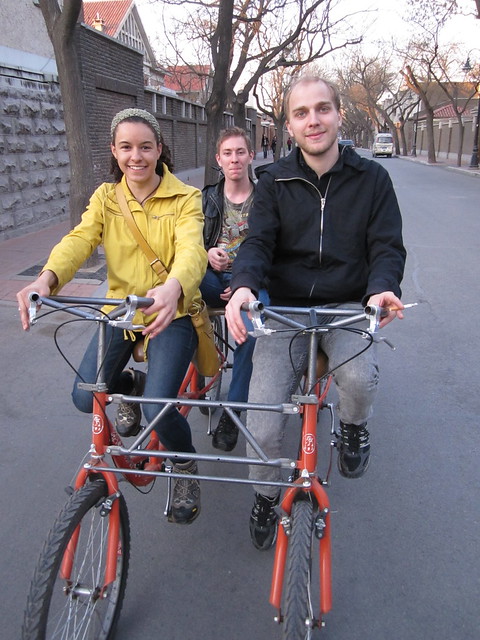 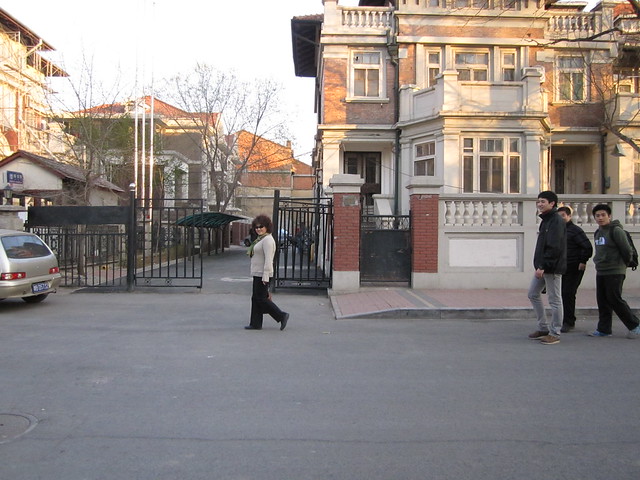 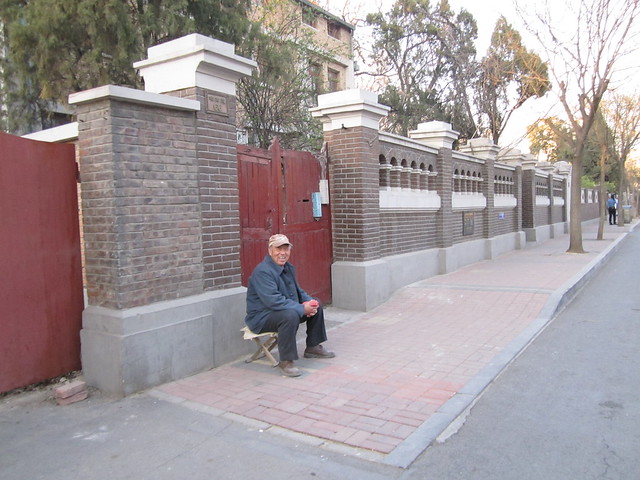 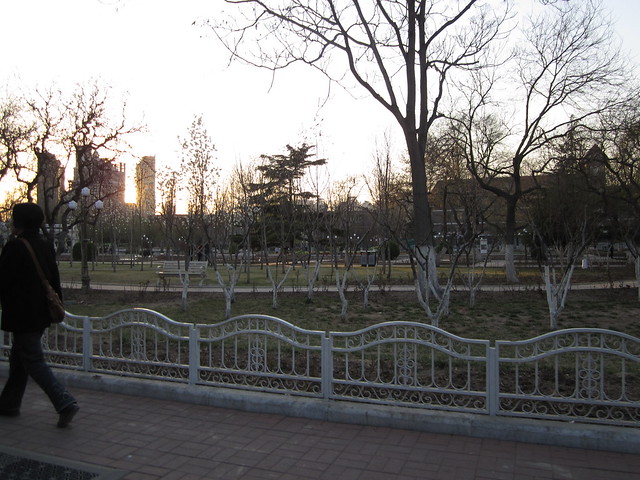 Before we returned the bike, as we approached a crossroad, we heard our names called from across the street. It turned out to be the other two friends we couldn’t find before. While wandering around, they had run into a pair of girls they had met during our first day in Tianjin. Tianjin, the city of coincidences!

Though Beijing is an fascinating city with much to offer, based on my first impression, I think Tianjin is more beautiful. The population is around a dozen million, but there is something quaint about the city. The air, the blend of historic, modern and downright quirky architecture and the noticeably smaller number of foreigners all contributed to this city’s charm. If were to study abroad in China again, I would seriously consider Tianjin. In fact, if I had the money I would do UW’s summer program in Tianjin to further continue my language studies.

Now I’m back in Beijing on the last day of the break studying for our big Chinese test tomorrow. If you have questions or comments I look forward to hearing from you!